Arrived in Madrid after an overnight flight.  The trip got off to a great start, as it was a very empty flight.  The passengers and even the crew were giddy over this.  I mean, the crew was like smiling, happy, telling everyone how they love when flights are empty.   This was American Airlines, and they were smiling!  They helped people find empty rows so everyone could spread out once we took off.  I had a WHOLE ROW OF FOUR SEATS.  It’s like first class, for thousands less!  Ok, so the seats are 15 inches wide – so what?  I was able to LAY FLAT.  This, like, never happens!

Arrived in Madrid, customs and immigration was quick and easy.  Then it was time to get a train to town.  I tried the Metro, but after two bleary eyed attempts I realized their English translation on the kiosks is not great.  English was offered as an option but then doesn’t translate some of the important words that are embedded into images on the screen. 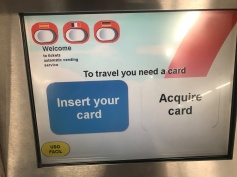 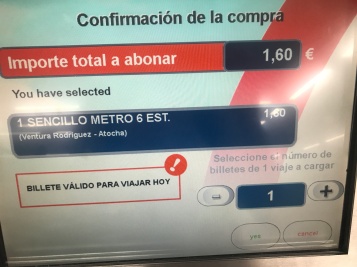 I gave up and got the train, which fortunately wasn’t much more expensive.

So at this point it’s 830am, and I can’t check into my AirBnB for several hours.  So I walk around for a bit, grateful to have only a small bag.  It’s a bit of a walk from the train across town to my apartment, but I have time to kill.  I take my time, and head to Plaza Mayor.  It’s beautiful, and at 9am, on what I later realized was a holiday, Labour Day, I had the plaza almost all to myself.  I found myself feeling like I was dreaming, that I have six more weeks ahead of me.  Maybe it was the jet lag, but I felt a little, almost buzzed.

I had some lunch at a great little cafe called Cafe Federal, a really good pumpkin and ricotta omelette, then sat in the little square outside the cafe for a while, where I found an option if I start to miss my bike:

After lunch, I headed toward my AirBnB apartment to meet my host.  The first person I meet in Spain is a very handsome, and fortunately English speaking man, who shows me the lovely apartment.  On the way, literally steps from my temporary home, is the Temple of Debod, an ancient Egyptian Temple which was rebuilt in Madrid from 1968-1972 when it was opened.  It’s something to see during the day, and really pretty at night.  I went back on my walk home after dinner to get a nighttime pic.

Speaking of dinner, I went to a great little tapas bar, (no shortage of them here) Estado Puro. 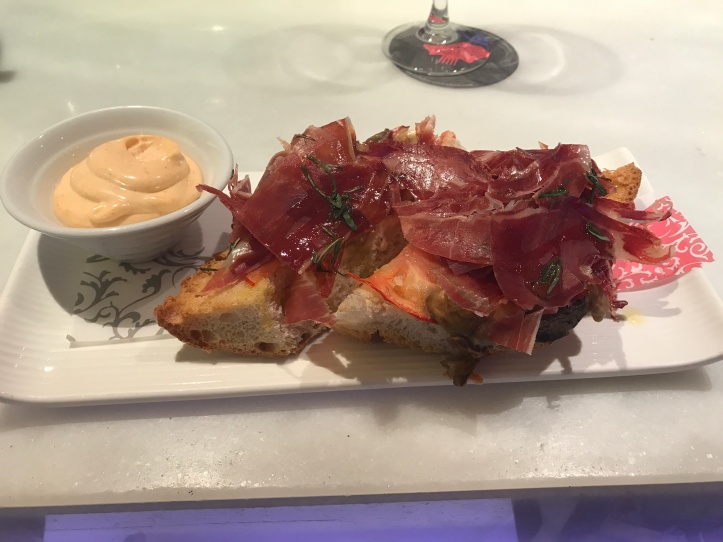 Light dinner.  As I walked home, and saw this…

Five Guys. On Gran Via!!?  They’ve sure come a long way since Northern Virginia.  I can’t believe with all the good food here, they’re lining up for American fast food.  Sigh…

Off to Toledo tomorrow!