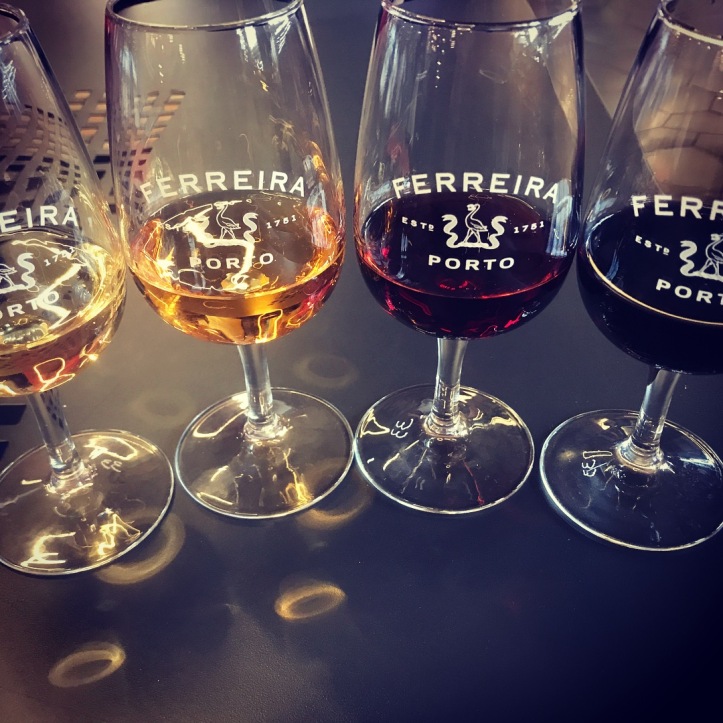 Porto is just over a two hour train ride from Lisbon.  Porto is beautiful, hilly, and larger than I expected.  My Airbnb was conveniently right next to the train station.  This was great, I could drop off my bag and go out to explore right away.

I first wandered down to the Ribiera, right along the river.  It was late afternoon, sunny and warm.  Tables at all the cafes along the river were packed.  I had scoped out a highly rated tapas place called Jimao a few doors up from the riverfront.  They were close to closing time, but the owner, who was sitting outside chilling after the lunch rush, let me have the small table where he sat, where I had a great view of the crowds along the river. 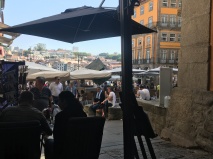 I then wandered over across the river  where all of the wineries are located.  It was too late to take a tour, so I made my own tour.  I had researched that the Ferria winery (look up) so I bought a flight while I googled the history of the winery and read a bit about each wine was made.  I know, I know, but I’ve DONE winery tours before, and I saved myself $25 bucks by doing my own self-guided tour!  I then visited the rooftop bar Espaco Porto Cruz  which had great views, and some fun port wine cocktails.

Heading back over the river, the next thing I wanted to see was the Majestic Café.  It’s an old Belle Époque style restaurant, built in 1921 and it is beautiful. 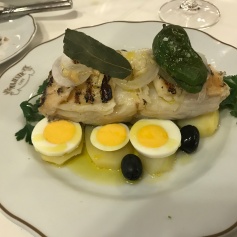 The food was ok, good, not great.  I was there for the atmosphere.   After I left, I was still a little hungry, but couldn’t decide if I wanted a glass of wine or some dessert. Then I realized, this is Porto!  I should get some dessert AND a glass of port.  Perfect end to the day!

I started out the day with a morning run.  The evening before, the light was not right for good pics of downtown from the winery side of the river.  I figured in the morning, it would be perfect – and it was. 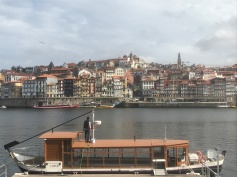 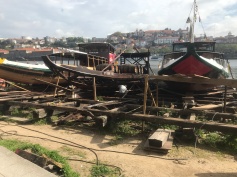 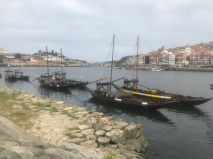 I’d picked up a special souvnier for back home, and I did not want to carry it around with me for the next four weeks.  I thought I’d try my luck at the post office again.  Another experience that trumped Spain.  The Portugal post office was friendly, not crowded (enough agents on duty) and the woman was super helpful.  I scoped out what I needed as far as size of the box, and decided to poke around to see if I could find more souvenirs, since I was mailing a box home anyway.

I went to the Torre de Clerigos,  but the wait to get up to the top was over an hour, so I decided to skip it.  The views are reportedly amazing, but I didn’t want to sit around waiting for an hour. Oddly, you have to buy your ticket then wait in a waiting area (not come back in an hour) to take your turn walking to the top.  Seemed silly and a waste of the little time I had.

I then wandered up to what I’d read was a good little shopping district, (name) but it was a total bust.  I was  hungry, so decided it was time to tackle a Francesshina – the local specialty sandwich.  I’d read about a trendy little place that had a good one, and good beers too.   Brasão Cervejaria was very busy, and I didn’t get seated for 25 minutes, though the hostess told me it would be 5-10.  I finally went up to her and she was horrified, she’d set a table and thought she’d seated me, she pointed to an empty table in the corner, which I had noticed was empty for a while.  She apologized profusely.  I ordered a local brew and the sandwich – a half portion which was huge!  The whole sandwich is an American super-sized thing.  It was good, almost  like a sandwich in a soup.  I suppose like a cheesesteak, something you eat as a tourist, or really late after beers as a local.  Total gut bomb! 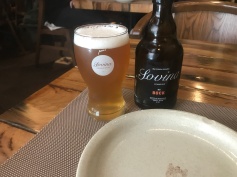 I then wandered back over to the post office, with my package, and shipped it home.  $20 Euro much much less than I paid in Spain to ship within Europe.

I walked over to the winery district again, but I had not booked a tour, and the English speaking tours were all sold out.  This was dumb on my part, lack of planning – burned again.  Anyway, the weather was cloudy, not as nice as the day before, which meant I could score a seat outside on the patio in front of Sandeman.  There are some great port wine cocktails. I am not usually a wine cocktail lover (spritzers, etc) but port wine is of course stronger, boozy, so it works pretty well with cocktails.  One popular summer drink is a white port and tonic.  Replace gin with white port, and it’s pretty amazing. 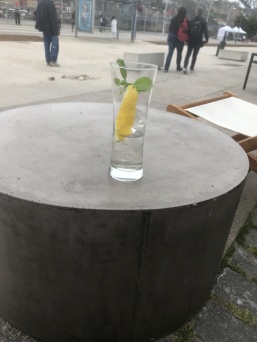 I walked back toward town and it started to rain.  I went back to my room to dry off and chill a bit before dinner. I had some schoolwork to finish up anyway.

As it got later, I got hungry.  I found a highly rated restaurant right near my airbnb.  I popped into Tapabento and realized I was probably not getting in.  It was jammed.  The woman at the front counter was scrambling, trying to fit everyone who wanted a seat into a table.  They took reservations, yet she was friendly and helpful as she tried to accommodate everyone.

The food and service were among the best I have had on this trip. I’d highly recommend this place.  I also met a group of Belgian guys, who told me a few places to check out in Brugge.  It was a great way to finish my time in Porto, and get excited about another stop on this trip!